The haemostatic system (described in previous sections) is always in a delicate balance between unstopped bleeding and thrombosis. The balance can however be disrupted by, for example, a state of disease or when blood comes into contact with the surface of a foreign material. In modern health care, treatment- and diagnostic methods often implicate the contact between blood and artificial materials (biomaterial). Treatments including venous catheters, stents, vena cava filters, vascular grafts and prosthetic heart valves are a few examples of biomaterials that are introduced into the vascular system and brought into contact with blood. This contact between blood and biomaterial is also constantly present during procedures when blood is handled outside the body, e.g. during cardiopulmonary bypass, in dialysis machines, during blood transfusions or simply, when blood is drawn by venipuncture and used for in vitro experiments. The artificial material surface may activate both blood cells (platelets and white blood cells) and the enzyme mediated coagulation cascade by exposing a surface that during blood contact shares certain characteristics with surfaces found at the site of vascular injury. This may ultimately lead to unwanted thrombus formation at the artificial surface (for example see Figure 1), a serious adverse effect that is usually prevented by aggressive antiplatelet and/or anticoagulation therapy. Three examples of such therapies are: high doses intravenous heparin during cardiac surgery with cardiopulmonary bypass [1], dual antiplatelet therapy after implantation of metal stents in the coronary vessels [2], and continous warfarin treatment of patients with prosthetic heart valves[3]. The extent to which artificial materials affect and provoke the haemostatic mechanisms is heavily dependent on the design and characteristics of the biomaterial, but also where in the vascular system it is implanted (for review see [4, 5]). Surfaces inert to platelet adhesion and activation of coagulation can be achieved through surface modifications. Immobilized heparin or poly(ethylene glycol) (PEG), are the most widely used surface modifications in this context [6, 7]. 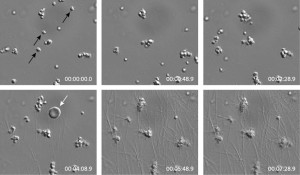 The adsorption of blood plasma proteins to biomaterial surfaces is usually a rapid process that within seconds generates a biologically active surface that may interact with other blood borne mechanisms [8, 9]. Both platelet adhesion and activation of the coagulation cascade are mediated by plasma proteins. Blood is a very complex fluid containing a large variety of molecules with different characteristics and functionalities. Proteins are one of the main constituents of blood plasma and approximately three hundred distinct proteins have so far been documented, with plasma concentrations ranging from 35-50 mg/mL for serum albumin to only 0-5 pg/mL for interleukin 6 [10]. The dynamics of protein adsorption are strictly related to the chemical and physical properties of the surface, protein and solvent, and the exothermic process is observed as a decrease in Gibbs free energy (G), i.e. ΔadsG=ΔadsH-TΔadsS <0, where H=enthalpy, S=entropy and T=temperature. This decrease generally arises from increased system entropy explained by dehydration of parts of protein and/or adsorbent surface, interactions between charged groups at the interface, and/or conformational changes in protein structure. The different modes of interaction result in selectivity between surface and proteins, i.e. proteins preferentially adsorb on surfaces exposing certain properties [11]. Proteins can adsorbed to form a covering monolayer on the surface, resulting in a protein layer with a thickness of 2-10 nm [12]. Accumulation of proteins at the surface may yield a concentration of surface-associated proteins that is up to 1000- fold higher than the concentration of the protein in solution [13]. Adsorbed proteins are not always bound indefinitely to the surface, and the composition of proteins may be subject to change over time. This phenomenon is termed the Vroman effect and has been observed to occur preferentially on negatively charged hydrophilic surfaces [14]. Wettability (or hydrophilicity) has been characterized as a key determinant for the protein adsorption process, and it is generally accepted that hydrophobic surfaces adsorb more proteins than hydrophilic surfaces [13]. The hydrophobic surface allows interaction with hydrophobic domains and residues in the protein, the process assisted by an entropy gain during the subsequent release of unfavorably organized water at the surface [11]. Surface hydrophilicity can be determined by static and dynamic water contact angle measurements and a surface is deemed hydrophobic when generating a contact angle with water of more than 65° [15]. Protein and surface charge are also important factors in the adsorption process, both dependent on the pH of the solute. Maximal adsorption occurs when surface and proteins possess opposite net charges, i.e. at a pH between the isoelectric points (pI) of the surface and the protein [11]. Conformational changes in protein structure have also been suggested as a potential driving mechanism for protein absorption, especially under circumstances when hydrophobic interaction and electrostatic attraction is not present. However, adsorption induced conformational changes have been reported in a variety of proteins and may also affect the biological activity of the protein [13]. The effect of flow conditions on protein adsorption has been studied; however, increasing shear does not seem to affect the adsorption process, not even high shear rates of 2700 s-1 [16].

Adsorbed proteins on artificial surfaces can be recognized by platelet adhesion receptors, potentially leading to the subsequent adhesion, spreading and activation of the platelet. The natural plasma soluble platelet adhesion and aggregation molecules fibrinogen, fibronectin, vitronectin, immunoglobulins and von Willebrand factor (VWF) are all potential mediators of platelet adhesion and have therefore been thoroughly studied in this aspect (Figure 2 presents a schematic drawing of biomaterial induce platelet adhesion and aggregation). Among these candidates, fibrinogen has been shown to be the key protein in the adhesion process [17, 18], whereas fibronectin, VWF and immunoglobulins only show supporting effects that may be related to platelet activation [19, 20].  Furthermore, the amount of adsorbed fibrinogen required to facilitate platelet adhesion is extremely small, ~ 7 ng/cm2 [18]. Platelet adhesion to surface-bound fibrinogen is however intriguing, since the fibrinogen receptor integrin aIIbß3 is required to be activated into a high affinity state by inside-out signaling to effectively bind fibrinogen in solution [21]. This mechanism is however overridden as integrin αIIbß3 in its “low affinity” state evidently is capable of binding surface adsorbed fibrinogen [22]. It is speculated that this is facilitated by a change in the conformation of fibrinogen when adsorbed to surfaces. The kinetics of platelet adhesion to artificial surfaces have been revealed to be very rapid and initiation may take place in < 5 s for hydrophobic surfaces and <30 s for hydrophilic surfaces [23]. However, this is not very surprising with the physiological function of platelets in mind: to rapidly adhere and aggregate at the site of vessel injury. The direct effect of wettability on platelet adhesion and activation has been studied with the use of hydrophilic-to-hydrophobic gradient surfaces, with water contact angles ranging from 40-90°. From this study it was evident that platelets in plasma adhered in increasing numbers with decreasing wettability [24]. This is no surprise since fibrinogen is retained to a greater extent by hydrophobic surfaces than by hydrophilic surfaces [8]. Prolonged exposure of thrombogenic materials to blood in vivo has showed that platelet numbers in blood decrease with surface exposure time. This discovery has been used to measure the actual thrombogenic effect of different biomaterials in animal models [5]. 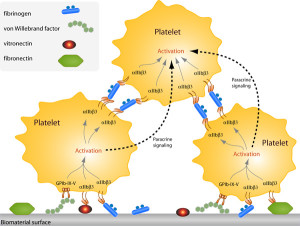 Although the physiological role of factor XII in haemostasis is debated, as congenital factor XII deficiency does not result in any type of bleeding diathesis [25, 26], it is however clear that factor XII has a great impact on coagulation during the contact between blood and artificial materials. Factor XII activation has for a long time been thought to exclusively undergo autoactivation on surfaces exposing a negative net charge (anionic surfaces). However, after the recent work of Zhuo et al. [27, 28] it is evident that autoactivation also can occur on hydrophobic surfaces, but only in neat factor XII buffer solutions. It has been hypothesized that factor XII in plasma is competitively excluded from hydrophobic surfaces by other proteins with higher affinity to the surface, a process that has been named “adsorption-dilution effect” [29]. Although this was an interesting discovery, it has no real impact on blood compatibility testing of biomaterials under physiological conditions. Blood contact will always entail competitive adsorption between the many plasma proteins, and contact activation of factor XII in plasma will therefore only occur at negatively charged hydrophilic surfaces. The underlying mechanism facilitating the conversion of the inactive zymogen factor XII to the active enzyme factor XIIa on anionic surfaces, independent on other enzymatic activity, is still not very well understood, but it is suggested to be facilitated by conformational changes in the protein structure upon surface adsorption [30, 31]. After initiation by factor XII the contact activation is effectively amplified by the presence of prekallikrein and HMWK. Prekallikrein is located at the anionic surface when bound to its surface binding cofactor HMWK. The co-localization of prekallikrein with factor XIIa on the surface facilitates the cleavage of prekallikrein to kallikrein, which then can participate in reciprocal activation of factor XII. The intrinsic pathway is from factor XII propagated downstream by activation of factor XI, which also is colocalized to the surface by HMWK (reviewed in [32]). The mechanisms of contact activation are presented in Figure 3. Contact activation in plasma by a hydrophilic glass surface will lead to fibrin formation in a matter of minutes. 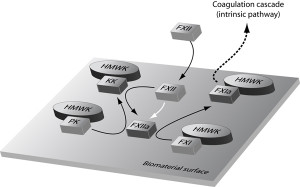 Although not the core of this work, it is important to mention biomaterial surface susceptibility to humoral immune complement proteins. According to theory, nucleophilic surfaces, exposing –NH2 (amino groups) or –OH (hydroxyl groups), but not negatively charged surfaces bind complement factor 3b (C3b). C3b in turn binds factors Bb and P forming an active alternative convertase C3bBbP, that subsequently cleaves C3 in solution to C3a and C3b [33]. An amplification mechanism is thereby formed. The surface binding of C3b was recently shown to also be mediated by pre-adsorbed proteins [34]. In yet another study, it was shown that negatively charged surfaces, such as silica and spontaneously oxidized titanium facilitate C3b deposition [35], leading to the hypothesis that complement binds to denatured proteins on surfaces regardless of surface charge. The alternative complement activation pathway is considered to be of greatest importance, and especially in blood contacting applications where a large area of the biomaterial is in contact with blood, such as cardiopulmonary bypass and dialysis apparatus [33].