Blood is a vital part of the human physiology; a transport system that brings nutrients and oxygen to sustain living cells and simultaneously facilitates the removal of carbon dioxide and other waste products from the body. Blood borne cells and enzymatic systems are also involved in the body’s defense to keep foreign substances and organisms from causing harm. To assure the continuity of these functions, it is of uttermost importance to keep the flowing blood inside the vascular system at any cost. The acute response mechanisms that are initiated to stop bleeding when blood vessels are injured are all comprised in the term haemostasis, from Greek meaning blood-stop. Since the blood is contained in a pressurized system, the temporary vessel repair mechanisms of haemostasis have to act tremendously fast and efficient in order to prevent excessive bleeding. However, such a potent system also requires the addition of strong regulatory mechanisms to keep it in a perfect balance so that the haemostatic response is not activated at the wrong time or in the wrong place. If the haemostatic system is too effective, if the control mechanisms fail or if the haemostatic mechanisms respond to triggers that are not specific to a vessel injury, the potent haemostatic system can also lead to unwanted thrombosis with subsequent vessel occlusion or embolism, ultimately causing substantial physiological damage. 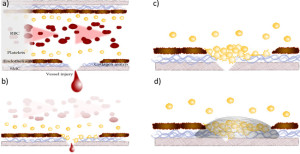 The haemostasis is a complex and efficient system that keeps the blood in balance between bleeding and thrombosis. In a healthy individual the blood is maintained in a flowing state during its passage through the vascular system, but always ready to rapidly form a haemostatic plug that will prevent unrestricted bleeding when a vessel is ruptured (Figure 1a). The normal haemostatic response occurs after a vessel has been damaged and the response can be divided into a primary and secondary stage. The primary stage includes the adhesion of platelets to the damaged vessel wall (Figure 1b), and platelet activation facilitating the recruitment of more platelets to the damaged area. These platelets form a platelet plug that initially stops the bleeding (Figure 1c) (reviewed in [1]). The second stage in the haemostatic plug formation is the coagulation process, initiated by exposed tissue factor on the damaged vessel wall. Coagulation is driven through a complex enzymatic pathway that involves several zymogen-to-enzyme conversion steps and allows the reaction to undergo great intrinsic amplification. The final step in this cascade is the conversion of soluble fibrinogen into an insoluble fibrin network. The coagulation process is accelerated by activated platelets and will ultimately form a stabilizing fibrin network that will secure the platelet plug until the vessel wall is restored (Figure 1d) (reviewed in [2]).

After the haemostatic system has played its part and the vessel integrity is restored by vessel repair mechanisms, the clot needs to be cleared in order to regain unobstructed blood flow. This is taken care of by the fibrinolytic system that digests the fibrin network into small soluble fragments that can be transported away by the blood flow. The pathway of fibrinolysis share similarities with the coagulation cascades and the key protein plasminogen is activated by zymogen-to-enzyme conversion (reviewed in [3, 4]).