The platelets are small non-nucleated cells circulating in our vascular system with a primary function to initially arrest bleeding from a damaged vessel by rapidly creating a platelet plug. Platelets and not replicate by cell division but originate from the bone marrow where they are shed off into the blood stream from the large megakaryocytes [1]. Platelets are the second most abundant cellular component in healthy blood, and the platelet concentration is in the range of 150 – 350 ×109/L [2]. The average lifespan of circulating platelets is estimated to between 7 and 10 days [3]. The platelet surface is packed with functional receptors to facilitate platelet activation and interactions with subendothelial matrix, other blood cells and other platelets. The platelet also contains several granules that upon activation can fuse with the platelet membrane and thereby release their content into the surrounding media. The granules are categorized into the larger a-granules, the smaller dense granules and lysosomes. a-granules contain a large variety of biological active substances involved in haemostasis, e.g. platelet activation and adhesion molecules, plasma coagulation factors and fibrinolysis proteins. The dense granules mainly contain ions and smaller signal molecules such as adenosine 5’-diphosphate (ADP), adenosine 5’-triphosphate (ATP) and serotonine. Lysosomes contain acid hydrolase, cathepsin and lysosomal membrane proteins [4].  Recent findings furthermore suggest the existence of two distinctly different types of a-granules that are selectively released depending on activation pathway. Most interestingly, these subpopulations contain either pro-angiogenic or anti-angiogenic mediators such as vascular endothelial growth factor (VEGF) or endostatin, respectively [5].  A rapid and effective response from the platelets is vital. To ensure this function the platelet are very sensitivity towards external stimuli and can undergo a fast activation process that is enhanced by intrinsic activation feedback loops in the form of autocrine and paracrine signaling (reviewed in [6]). A schematic illustration of the platelet, including principal adhesion, activation and aggregation receptors is presented in Figure 1. 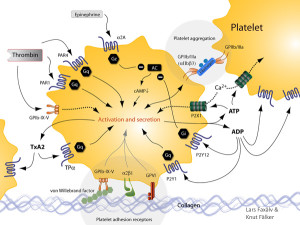 Figure 1. A schematic illustration of the platelet and its main functional receptors. Platelets adhere to collagen in the damaged vessel wall through adhesion receptors. The adhesion receptors can contribute to platelet activation and thereby stimulate the release of autocrine activators such as ADP and TxA2. Upon activation the platelets are capable of forming platelet aggregates by linking to fibrinogen molecules with the GPIIb/IIIa receptor. Thrombin, produced by activation of the coagulation cascades can also activate PAR1 and PAR4 by proteolysis of the receptor.

Following vessel wall injury, platelets rapidly adhere to exposed elements in the subendothelial matrix; initiating the first step in the haemostatic response leading to the formation of a platelet plug. This primary adhesion is mediated by the synergistic function of several receptors on the platelet surface. Collagen is the main component of the subendothelium matrix and is also considered to play the principal role in the adhesion process. Nine types of collagen have been identified in the vessel wall but the main constituents have been determined as collagen type I and type III [7].The local flow conditions are also important in determining the platelet behaviour. Blood is always moving inside the vessels, but the conditions can vary from almost stagnant to extremely high flow rates. The velocity of blood, in relation to the stationary vessel wall, gives rise to shear forces in the moving blood that can be described by a velocity gradient. Shear forces will lead to a higher concentration of erythrocytes and other large blood cells in the middle of the high-velocity flow, and the platelet concentration will be highest closer to the vessel wall where the fluid velocity is lower [8, 9]. The highest shear rate, or velocity gradient, is always found closest to the vessel wall [8]. Under high shear conditions, the initial tethering and arrest of platelets from the flowing blood to collagen is facilitated by the glycoprotein (GP) Ib-IX-V receptor, a heterotrimer composed of two disulfide linked GPIba-GPIbß in complex with two GPIX and one GPV [10, 11]. The binding is mediated by von Willebrand factor (VWF), a multimeric plasma protein that rapidly binds to exposed collagen. Long multimers of VWF can contain several binding sites for the GPIb-IX-V adhesion receptors and upon binding GPIb-IX-V is capable of outside-in signaling leading to platelet activation [12, 13]. The GPVI receptor binds directly to collagen via the specific Gly-Pro-Hyp peptide repeat sequence and has an important role in platelet activation by outside-in signaling [14, 15]. The GPVI activation has been found to be mediated by the Fc receptor γ-chain, also involved in platelet interaction with immunoglobulins [16, 17]. The integrin α2β1 adhesion receptor (also known as GPIa/IIa) can bind to collagen directly. Although it has been indicated that the α2β1 integrin is not involved in the initial tethering of platelets to collagen under high shear, it is still considered important for firm adhesion and securing the platelets [18]. α2β1 has also been proposed to be involved in platelet spreading on the collagen surface [19]. The integrin α2β1 receptor must be activated by inside-out signaling to attain a state of high affinity for its ligand [20]. The two collagen receptors GPVI and α2β1 are both essential for platelet adhesion and aggregation on collagen in flow conditions, blockade of either receptor will abolish the platelet plug forming capabilities [21].

Once a primary layer of adhesive platelets have covered the exposed subendothelial matrix, subsequent adhesion will continue but in the form of aggregation, where platelets from flowing blood bind to adhered platelets at the wound site. The mechanism of platelet aggregation is mainly attributed to the integrin αIIbβ3 (also known as GPIIb/IIIa) receptor. The main ligand of integrin αIIbβ3 is fibrinogen but the receptor also have affinity for multimeric vWF, vitronectin, fibronectin and thrombospondin [22]. The mechanism of aggregation involves two integrin αIIbβ3 receptors on different platelets that bind to the same fibrinogen molecule. The αIIbβ3 receptor has a low and a high affinity state for binding fibrinogen. The high affinity state is achieved by inside-out signaling when platelets are activated [23]. The αIIbβ3 receptor can also mediate outside-in signaling by binding fibrinogen [24].

In order for the recruitment of platelets to continue during the aggregation phase it is necessary that the activated state of the adhered and aggregated platelets can be propagated to newly arriving platelets. This propagation of activation is executed via potent autocrine and paracrine signaling pathways. Activated platelets will secrete abundantly of ADP and ATP from dense granule that in turn may activate neighboring platelets via ADP and ATP sensitive receptors. ADP is a ligand to the receptors P2Y1 and P2Y12, located on the platelet surface [25, 26]. The P2Y receptors are seven transmembrane spanning proteins that transmit outside-in signaling by coupling to G-proteins [27]. The P2X1 receptor is a ligand gated cation channel and was not until the year 2000 disclosed as a specific ATP receptor. Its main function has been suggested as potentiating mechanism for other activation pathways [28]. Following initial platelet activation, the signal molecule thromboxane A2 (TxA2) is rapidly synthesized and released by platelets. The target for TxA2 is the TPa receptor, a seven transmembrane spanning receptor that is coupled to G-proteins on the cytosolic side. TxA2 is a lipid signal molecule synthesized by arachidonic acid metabolism, and the synthesis can be effectively inhibited by aspirin treatment, resulting in the attenuation of platelet activation [29, 30]. During thrombus formation, the simultaneous activation of the coagulation cascade results in generation of the key coagulation enzyme thrombin. Thrombin has a dual role in haemostasis, as it in addition to facilitating the fibrin network formation also has a function as an activator of two distinct platelet receptors, namely the protease activated receptors (PARs) 1 and 4. Thrombin acts on the PARs by cleaving off a small peptide from its exposed extracellular part of the N-terminus. The cleavage results in a new tethered N-terminus that functions as a ligand and thereby mediates the activation of the receptor. The outside-in signaling event is further propagated on the intracellular side by coupled G-proteins [31, 32]. Although PAR1 and PAR4 couple to the same G-protein subtypes, PAR1 and PAR4 apparently differ in terms of affinity for thrombin and the duration of intracellular signalling. It has been proposed that PAR1 has a higher affinity for thrombin than PAR4 [33-35]; however, there is evidence that PAR4 is also activated by thrombin at low concentrations [35]. Furthermore, GPIba binds thrombin with high affinity and has been proposed as a cofactor for the PAR activation mechanism by co-localization of thrombin with the PAR receptors, thus facilitating their cleavage [36]. A large number of the platelet signaling receptors are coupled with G-proteins on the cytosolic side and such receptors are therefore termed G-protein coupled receptors (GPCRs). There are several types (and subtypes) of G-proteins in platelets and the most prominent a re Gq, Gi, Gz and G13. Their respective activation will propagate through different intracellular signaling pathways and lead to differential activation responses (reviewed in [37]). The platelet receptors are an exceptionally important part of the functionality of the haemostatic system and deficiency of functional platelet receptors often result in bleeding disorders (reviewed in [38]).