The extrinsic pathway is the main contributor to physiological activation of coagulation in vivo. The pathway is initiated by tissue factor (TF), an integral membrane glycoprotein found in extravascular tissue [7, 8]. TF can bind the blood born factor VII (FVII) as well as its active form, factor VIIa (FVIIa). FVII is mainly found in circulation as the inactive zymogen, but reports state that 1-2 % of the total amount is in the activated form, FVIIa [9]. TF itself has no enzymatic function, but serves as a cofactor and facilitates rapid auto-activation of FVII and equally important, dramatically enhances the enzymatic activity of FVIIa [10].  The TF:FVIIa (extrinsic Xase) complex can activate both factor X (FX) and  factor IX (FIX) into their active forms [9], and as part of an initial amplification loop, both FX and FXI contribute to further initiation of coagulation by feedback activation of more FVII to FVIIa [11, 12]. Also, an inhibiting mechanism of FXa has recently been proposed, due to the fact that  FXa remains reversibly bound to the TF:FVIIa complex after activation, hence blocking further activation of remaining FX [13]. The small amounts of FXa that are initially formed lead to a limited conversion of the zymogen prothrombin to the enzymatically active thrombin. The minor amount of thrombin produced through the extrinsic Xase pathway is however insufficient for complete fibrin formation but is enough to activate platelets through PAR receptors as well as converting the cofactors factor V (FV) and factor VIII (FVIII) in the intrinsic pathway to their active forms. The activated FVIIIa can in turn form a complex with FIXa, previously activated by the extrinsic pathway. The FIXa:VIIIa complex (intrinsic Xase), preferentially assembles on the phospholipid membrane of activated platelets [14, 15], where it effectively activates FX at a far greater conversion rate than the extrinsic Xase complex [16]. The rapidly forming FXa will thereafter form the prothrombinase complex together with FVa, also located on the phospholipid membrane [17]. The FIXa:VIIIa and the FXa:FVa complexes are both highly efficient and will in short time raise thrombin concentration levels sufficiently to facilitate fibrin network formation. An additional amplification step constitutes the feedback activation of FXI by thrombin, subsequently generating activated FIX, and thereby boosting the ongoing activation of the intrinsic pathway [18]. This amplification mechanism is however only considered relevant in a setting with a low level TF exposure [19], e.g. after tissue factor pathway inhibitor (TFPI) shuts down further TF-dependent activation [20]. The activation of factor XI by thrombin has been proposed to occur on the platelet surface since both factor XI and thrombin can bind to the platelet receptor GPIba [21].
The entire coagulation pathway, comprised of multiple steps of zymogen to enzyme conversions are indeed very nested and complex. However, FX activation, the point of convergence for the extrinsic and intrinsic pathways, has been deemed as the rate limiting step for thrombin generation [22]. Once the massive thrombin generation has started, soluble fibrinogen is rapidly converted into soluble fibrin molecules that immediately start to assemble into fibrin fibers in a favorable reaction. Activation of the extrinsic pathway by tissue factor and the follow enzymatic coagulation cascade are visualized in Figure 1. 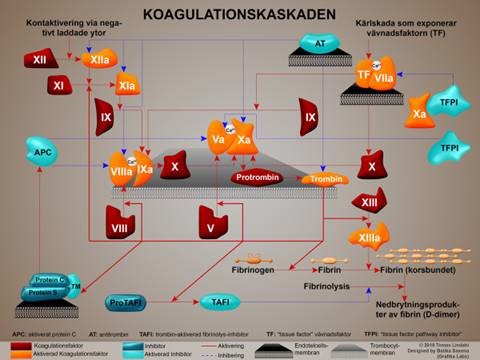 Figure 1. Tissue factor bearing cells in the damaged vessel wall can initiate the extrinsic coagulation cascade. Small amounts of thrombin are produced by factor Xa which in turn will active part of the intrinsic pathway (FXIa and FXIa/FVIIIa complex) leading to a large scale production of the very effective prothrombinase (FXa/FVa) complex on the surface of activated platelets. The prothrombinase complex will generate massive amounts of thrombin from prothombin. Thrombin cleaves off the fibrinopeptides from the fibrinogen molecule, making the molecule able to polymerize into a fibrin fibre. Finally the fibrin fibres are stabilized by the cross-linking activity of factor XIIIa.